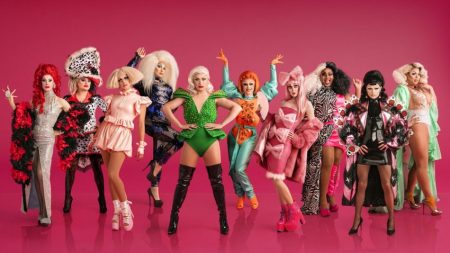 The 10 queens for the first series of RuPaul’s Drag Race UK have been revealed and they include Esmale favourite Baga Chipz! The show debuts later this year on BBC Three hosted by RuPaul and featuring Alan Carr, Graham Norton, Michelle Visage, Lorraine Kelly, Cheryl Cole, and more as guest judges. Check out the queens below…

“But I’ve built a big social media profile, and I now have a platform that allows me to talk about what it’s like to be gay and a queen in Belfast.”

“As a kid I was dressing up in dresses all the time, but the first time I went out, I went out as Christina Aguilera from the Moulin Rouge video.”

Originally from Canada, Crystal has been living in the UK for 10 years.

“I do aerial circus, I can crack a whip, put cigarettes out on my tongue – it’s a freak show.”

“I am a Chinese male who’s overweight and losing his hair.

“When I started doing drag five years ago, I wanted a name that was cheeky but also reflected my British Vietnamese heritage.”

“I think my degree in dance will give me an edge because there are several challenges that are thrown at you where you have to use your body.”

Gothy describes her drag as “dark, contemporary, striking and unique”.

“I first did drag on New Year’s Eve 2016 and it was a mess. I was in a leotard with no wig on but I was living my life, having the best night ever.”

“Drag is the new black,” she says.

Scaredy is the youngest drag queen to ever appear on Drag Race and is fairly new to the whole scene.

“I really haven’t done it that long. It was probably about a year ago. I was with my girlfriend trying to have a laugh. It was quite embarrassing but it went quite well for a first try.”

The Vivienne is a comedy queen who says she’ll do impressions “for the right price”.

“Comedy is definitely my trump card. My favourite trick in drag is my vocal impersonations so I do everyone from Kim Woodburn and Cilla Black to Donald Trump,”

Images and words thanks to the BBC.