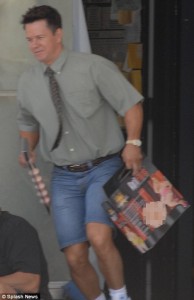 According to Daily Mail, on Monday April 23, Wahlberg was spotted leaving a male sex shop while in Miami. These toys will more than likely find themselves used as props for his upcoming film Pain and Gain, co-starring Dwayne ‘The Rock’ Johnson. Rumour has it that the male sex toys will be used during a torture scene in the film.

“We can’t say whether the items are going to be used as a movie prop or not,” and continues as saying “Of course, even if that’s the case, we’d prefer to imagine Marky Mark doing something a little funkier with them…”